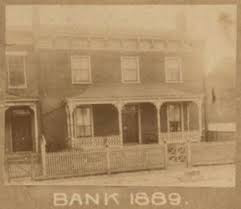 The First Black-Owned Bank in America

For Black History Month, we are celebrating the first Black-owned bank in the United States of America, the Savings Bank of Grand Fountain United Order of True Reformers, also known as the True Reformers Bank. This bank was founded in 1888 by the Reverend William Washington Browne, who was himself a former slave from Georgia who had escaped to fight with the Union Army during the Civil War.

After the war, Browne founded a Black fraternal organization known as the Grand Fountain United Order of True Reformers. However, tensions with a gossipping White shopkeeper arose when Browne attempted to open a local chapter in Virginia. After a recent lynching, racial tensions were high, and rather than rely on Whites to hold the organization’s savings, Browne decided the True Reformers would found and open their own bank to keep their money out of the hands of Whites.

A New Bank was Born

The bank opened its doors out of Browne’s own home in Richmond, Virginia in 1889, one year after its founding, and thrived. During the financial panic that gripped Richmond in 1893, the True Reformers Bank was the only bank to remain fully operational within the city, and honored the cashing of all checks while paying out every account’s full value. Even though Browne himself passed away almost ten years later in 1897, the True Reformers Bank continued to thrive and expand, venturing into other business opportunities such as purchasing a newspaper and entering real estate, as well as buying a retirement home and procuring a loan association. Through these enterprises, the Black middle class grew in the region, building wealth into communities once ravished by slavery and the Civil War. By 1900, this bank was operating in a whopping 24 states, even as far away as Kansas.

The bank was eventually forced to close in 1910. The new president had made several unsecured loans that ultimately defaulted, on top of an embezzlement scandal to the tune of $50,000, a hefty sum even today. However, despite this stain on the establishment, the True Reformers Bank stands as a triumph under the leadership of William Washington Browne, as he had a vision of not only growing the Black middle class, but also providing Blacks with jobs, business opportunities, loans, networking, and building up community leaders. This evoked a sense of pride within the community to be able to make a life for themselves while also having a trusted Black establishment for their money. Even though the Civil War was over, racism was not, and thus Browne gave a sense of security to the Black community of the day.

Browne was a pioneer for his time. He broke ground upon the idea of creating Black generational wealth and also by his determination of closing the racial wealth gap. He envisioned a world where Black men and women could come along White men and women in banking and commerce on equal footing. It is because of Browne’s bravery in opening his own bank, and being the first Black bank in the history of our nation, that we celebrate him and his legacy for Black History Month.